Grand Rapids has made a lot of lists.

It's a great place to raise a family, a leader in sustainability and green initiatives, an emerging downtown and a happy place to work, among other wonderful things.  But two of those titles are coming together as one industry ensures its mark will be left on Grand Rapids for years to come.  In May, Grand Rapids was voted in a national poll as BeerCity, USA, for a second consecutive year, while the Arbor Foundation named Grand Rapids a Tree City, USA, for the 15th straight year.

As noted, Grand Rapids is huge into sustainability, with more LEED-certified buildings per capita than any other city, and just an overall environmentally-conscious population. But the beer community exemplifies this.
A collaboration between 17 area breweries and the Friends of Grand Rapids Parks will donate money from each of the breweries' "tree beers," which are all made using an aspect of a tree.  The money will be used to help fund "brewers groves" in area parks. 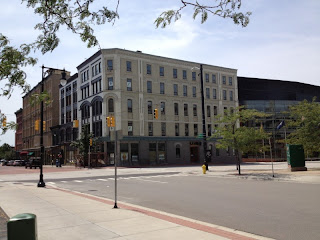 This isn't the first time the breweries have cooperated to support the environment. Earlier this year, three area breweries teamed up and joined a national clean water movement, because as one would guess, it takes clean water to brew clean beer.

But it's not just vocal movements, breweries build sustainability into their everyday business.
The regions two biggest breweries, Founders Brewing Co. and Bell's Brewery, direct more than 90 percent of their waste away from landfills. They also use steam from their heating processes to power parts of their buildings and have incorporated many more green practices into their business models.  Grand Rapids Brewing Company is the only certified organic brewery in the state of Michigan.

The Grand Rapids beer industry is in a mad dash to grow, but our local breweries are also doing their best to stay around and better their community and the world at large.  That's good news for all of us, beer lovers or not.